Savant – a person of profound or extensive learning; a learned scholar

I was honored to meet and listen to Adrian LaChance, a Cree Facilitator/Story Teller and
Traditional Dancer last weekend. He told us that it has taken him many years to learn all the traditional laws, stories and dance routines. His life did not have a good start and he suffered many years of abuse, hardship and sunk into a dark underworld as he grew older. He was saved by the teachings of his elders, realizing there was another way to live his life and benefit others. Now Adrian travels the world to spread the word of his First Nation ancestors and delight his audiences with his humor, honesty and conviction.

He designed his magnificent traditional dress  himself and is decorated with eagle and bear motifs as well as real eagle feathers. Each bead and decoration are symbols of Adrian’s tribe, beliefs and craft. I’m sure you will agree with me it is superb. Not all learned scholars are academics after all. 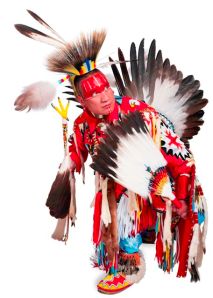 Some of you may know that from early childhood, I have been fascinated in Native culture and wanted to be a squaw as a child. I won an art competition at 7 years old receiving a book – The Story of Hiawatha. Years later when I was regressed, one of my ‘lives’ was as a squaw but I dismissed it as wishful thinking. However, over two decades later, my cousin found out that one of our great great grandfather’s married a squaw from the Lumbee tribe! This excerpt is my transcript from my regression.

I look down into the still glassy water and see an old face, deep down I know it to be my face. The deep lines creasing my eyes, cheeks and mouth are at the same time familiar and alien. Dark brown eyes and skin are in contrast to my hair, which was once a shiny ebony mantle but now streaked with silvery grey, hair now thin and wispy in one long plait down my back. Splashing my face with the icy cold water, I look up to see the teepee’s across the stream that feeds the lake and raise my old body upwards. I’m only good for collecting wood, minding the children and cooking, my days past slowly. Without a husband, I have to ingratiate myself to my daughter’s brave, be of help so I can have a place to sleep, tucked into the side flaps, under my buffalo bedding. Walking back the horror of that far day comes back, maybe it’s the similar setting, the crispness of the air but I ‘see’ the riders coming over the hill, the crack of the guns and the sudden screaming, startled me. The soldier’s were yelling and laughing as they rode through the camp, shooting my friends and family; everyone they see fleeing.  I was helpless to stop them, I’d screamed back but was too far away. Fear stops me running toward the murderers but my heart breaks as I watch the massacre. Crouching under a bush I’d covered my ears until long after the screaming and pounding hooves had ceased. Too scared to move I’d waited until nightfall before walking back to a blood soaked and burnt earth where my home had once been.

I hadn’t noticed I was walking as the horrors around me had numbed my body and mind. The land was silent and still as though shocked and sadden as was I. Whimpering coming from the far side of the camp leads me gradually in that direction. To my utmost joy I found my grand-daughter but my grief had sprung into my heart as I saw she was huddled underneath my own daughter’s body. Taking her up into my arms, other sounds around me come to my ears as one by one the women and children uncovered themselves and crawled out of their hiding places.

This past will never leave me and I wait for my time to come when I will be with the spirits and my husband, who had fought so bravely on that fateful day against an enemy so cowardly and strong. The firewood is weighing heavily now as I enter the camp and I smile at the last of the Lumbee tribe survivors.