Eleemosynary – definition: 1. of or for charity; charitable; 2. given in charity; having the nature of alms; 3. supported by or dependent on charity.

Don’t you just love this word? I do.

When I lived in England I used to travel the country visiting castles, historic houses and ancient archaeological sites. Among the many places I saw were Alms houses. These buildings were built to house the poor, old and distressed people and were often funded by Christian institutions. The first Almshouses were established in the tenth century in Britain. King Athelstan (a personal favorite) founded the first recorded Almshouse in York, England. The Hospital of St. Cross in Winchester is the oldest still in existence, dating from about 1132.

There are Almshouses in other countries. One was established in Stavanger, Norway in 1269 or 1270. Almshouses were introduced to the Commonwealth of Pennsylvania by it’s founder William Penn. In Maryland the legislature created almshouses in Anne Arundel County, which were financed by property taxes on landowners. Another state with a long tradition of almshouses is Massachusetts. The aid was available in the United States mainly for the elderly and disabled, and for children that had to sleep in the same rooms as adults. Non-governmental organizations provided this care due to the scandalous limited care available. This system began in the eighteenth century.

The photo above is Almshouses in Stratford upon Avon, England and the ones below are Trowbridge and Chipping Norton, England. 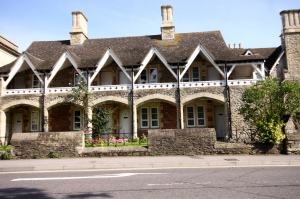 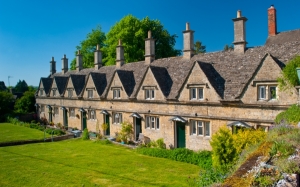 Have you visited Almshouses?