Benevolent – definition: marked by or disposed to doing good

There are many people, past and present, who have changed the course of conflict but today I am concentrating on the natural world and partnerships between different species. The correct name is  commensalism, which means one organism benefits and the other organism isn’t harmed by the partnership. It is a matter of conjecture how these partnerships began but once you realize the benefits for both partners it is obvious. 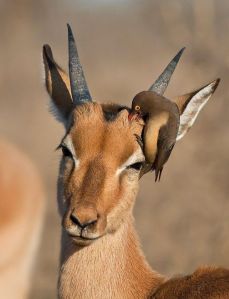 Impalas enjoy the ministrations of ox-pecker birds, whose name describes their role exactly. They peck off unwanted and irritating flies and ticks. In doing so the birds have plenty to eat without having to fly great distances and the impalas are freed of the parasites, which can carry diseases.

Ox-pecker birds and other similar breeds perform this duty on many animals around the world.

Another mutually beneficial relationship is between clown fish; made famous by Finding Nemo of course; and anemones. The fish dances within the anemones tentacles until they are acclimated to their host. The clown fish’s skin has a layer of mucus, which makes it immune to the fish-eating anemone’s lethal sting. In exchange for safety from predators and food scraps, the clown fish drives off intruders and preens its host, removing parasites. 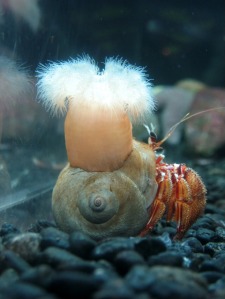 Hermit crabs and sea anemones share an unusual relationship, which can last for life. Young hermit crabs often pick up young sea anemones to attach to their shell . They even grow at roughly the same rate. When the hermit crabs outgrows its shell, they will take the sea anemone with them to the new one. Some sea anemones are known to cover most of the surface of the hermit crab’s shell so when the crab eventually outgrows the shell, they can remain and not move. The benefit for the anemone is particles of the crab’s food floating up to it and the crab’s benefit is having a stinging tentacled protector.

I would like to think that authors, whether published or not, will see the benefits of such a relationship and help their fellow writers. There are benefits to sharing knowledge, encouragement and support.

Have you given or received some sort of mutually beneficial relationship?