Another intentional community option in alternative living is co-housing. This consists of private homes supplemented by shared facilities. The residents plan, own and manage the community through the purchasing of land, building of structures and also detail the shared activities for residents, such as cooking, dining, gardening, child care etc. They also create a non-hierarchical body, which has a consensus decision-making role for the community as a whole. Individuals take on leadership roles, such as being responsible for coordinating a gardening project or facilitating a meeting. These residents put the plans into practice for the shared facilitates, that may include guest rooms, recreational features, offices and even internet access. This system encourages interaction among the neighbors for not only practical and social benefits but also environmental and economic ones.

This manner of living began in Denmark in the 1960’s when groups of families being dissatisfied with the existing housing model, organized 50 families to organize a community project in 1967. The result was the oldest known modern co-housing community, Saettedammen.

Most co-housing groups seek to create a multi-generational community although some are for seniors only. The design can vary from one co-housing unit to another depending on what the residents feel is most important. A Sihevuan, which is a quadrangle design of housing in China is similar to co-housing in that the residences share a courtyard.

Co-housing has become more and more popular and there are hundreds of them in Denmark and other countries in northern Europe, such as the Netherlands which has 73 mixed-generational and 231 senior communities.. The United States has 120 operating communities and another 100 in the planning stages. In Canada we have 11 completed communities and 19 being planned. Co-housing only started in the U.K in the 1990’s but now has 14 purpose built and 40 plus more in the development stages. 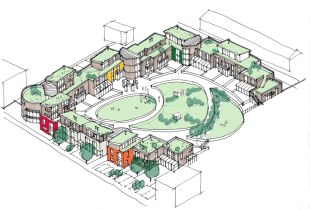 To give you an idea of how these communities look – the U.K’s projects range from 8  to around 30 households. Although most are mixed with single people, couples and families some have been created for specific demographics, such as people over 50 and even one for only women over 50 years.

The structures can be newly built homes or conversions of farms, mansions or even former hospital buildings. They can be urban, semi-rural or even rural. It can be a mixture of low-rise apartments, townhouses or a cluster of detached houses. The common denominator is a shared green space where vehicles are kept to the periphery to ensure interaction with neighbors, gardening/food produce and the safety of children is predominant. With the structures clustered together this type of community addresses the problem of suburban sprawl.

Other options for creating a co-housing community is to purposely buy adjacent properties and remove the fences. This is also called intentional neighborhoods. A common house for building for shared activities can be built later.

Co-housing residents do not have shared economy or a common set of beliefs or religions but invest in the creation of a interconnected community which is socially rich. Typically there is a low turn over of residents in co-housing sites as they are designed with the residents needs in mind rather than a developers views on what can sell. 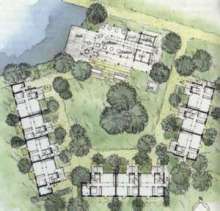 I have to say this kind of living alternative appeals to me. Each family unit has their own space but also have the option to converse and share activities with their close neighbors. I would think it stops the loneliness for single seniors and gives young couples the opportunity to have carers they know for their children. As we all know not everyone lives near family.

Would you consider an alternative living option?