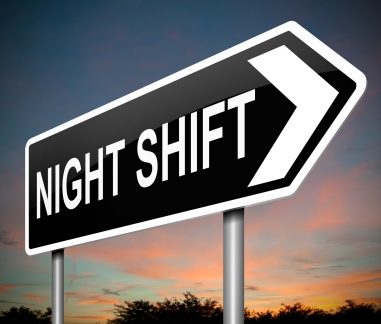 I just had to share this link – original here: http://www.ranker.com/list/creepy-night-shift-stories/rosa-pasquarella?&var=12  – the stories are so deliciously creepy.

1.  Night nurses get phantom call from empty room with no phone
“I work as a transporter in a hospital. About two years ago we moved from the old city hospital into a new state of the art facility. The old hospital was built in the 1930s and was showing its age. At night was just plain creepy. Each floor had an east and west wing. The east wing of the fourth floor was the first wing to be shut down about two weeks before the move. One night at around 9:30, I’m up on the floor to get a patient from the west wing. I see a small group of nurses and aids who all used to work on the now closed east wing. They looked visibly shaken. I walked over to see if everything was OK. They told me that they had decided to walk through their old wing for nostalgia’s sake. When they were over there, the phone at the nurses station started ringing. The computers and phones had not yet been moved. Not sure what to do, one of the nurses reached over the counter and answered the phone. The nurse told me there was a woman’s voice on the other end and that she sounded confused. This is the conversation as best I can remember it.

‘I’m a nurse. Is there anything I can help you with?’

‘This is (hospital name). Are you patient here?’

Then the line went dead. That’s when the nurse finally looked at the screen on the phone to see where the call was coming from. The phone gave the room number directly next to the nurses station. The rooms by this point had all been cleared out and the phones removed. They could see directly into the room and see that there was nobody in there. That’s when they bolted towards the west wing where I was getting off the elevator. I avoided that wing for the rest of my time there.”
2. Spirit of abused child haunts child welfare center; wakes children up to play in the middle of …
“I work at a crisis nursery, which is a childcare facility that provides emergency and respite care for children under the age of seven. I used to work graveyards all the time. I have to say first that I am absolutely a non-believer in paranormal stuff. That being said, at two in the morning in a dark room when you and two or three other girls in their twenties are the only adults in the building, sh*t gets creepy sometimes.

The facility I work in was named for a child who was beaten to death by one of their parents. The nursery was started in their name as a way to hopefully prevent another child dying a violent death at the hands of a stressed-out caregiver.

So the story that goes around is that this kid’s spirit haunts the nursery and is mostly active at night. They tell me that one of the reasons that everyone thinks this place is haunted is that many different people have reported different children asking about ‘that kid’ as in, ‘why doesn’t that kid have to go to bed?’ while pointing at nothing. I brush it off, basically forget about it.

A few weeks later, I was in the sleep room (the bedroom where all the kids sleep. There must always be an adult in the room with the children) by myself. I’m just chilling, reading a book with a booklight. The rest of the room is pitch black and silent.

All of a sudden, this kid (probably four or five) sits bolt upright in bed and says, ‘Hey, how come they aren’t asleep? Why do they get to play? I want to play too!’ all while pointing at a wall with no kids anywhere in the vicinity.

Instant crazy shivers all over me. I was so scared I almost screamed. I refused to be alone in there from that moment on.”

3. Hospital orderly sees woman who had just recently passed away
“I work at a hospital overnight. By far the creepiest thing happened while I was cleaning two rooms after the patients left. The rooms were connected, with one exit. I cleaned the first room, left for 10 minutes, got my supplies and went back to the other. I saw a little old lady in a chair, hunched over. I stared at her for a few seconds. I thought it was odd they put a patient in that room already. I begin cleaning, and look back at the other room – it’s empty. She disappeared. I would have seen if she walked passed me. Creepy. No one on the floor fit the description I gave of her – except the lady who died in that room four hours before my shift.”

“Insidious” starts playing by itself as movie theater closes down
“I was a shutting down projectors and closing down the movie theater around two in the morning. I shut off the one projector and turn around to see one theater starting to play Insidious from the beginning without previews. It was extremely out of place considering the projectors are programmed for the movies to start automatically with the 20-minute previews built in. No show was scheduled in the computer and I still don’t know how it started. But I locked myself in the office for the rest of the night.”

4.  Lights go haywire and cell doors slam in abandoned jail set up in city hall basement
“I used to work at city hall a few years ago as a security guard. There were abandoned jail cells in the basement that haven’t been used in years and part of my duty was to patrol them for any squatters. It was probably my second time patrolling alone and things started to get really weird. I went down to the old prison/holding cells. It’s a long, narrow hallway with cells on both sides. The hallway was lit by light bulbs hanging from the ceiling. I was walking past the fourth column of cells when the lights went out. I turned my flashlight on and walked back towards the light switch. Right when I was about to turn them back on, the lights flickered on again. I started walking fast past the cells while quickly checking them. I was about halfway through when the lights went off again. I heard two cells slam. I ran with my flashlight on straight toward the other end of the hallway and up to my workstation. I then called my supervisor and asked him if there were any electrical issues that have been reported. He said no. I had two hours left on my shift, and couldn’t leave. I was at my workstation paranoid as fuck.”

5.  Polite ghost holds elevator for coworkers
“Two different times I saw someone get on an elevator as I came around a corner. I said, ‘Hold the door!’ As the door started to close, it opened back like someone had hit the button. When I got into the elevator there was no one in it. After that, many times just as I came around that corner, the elevator door would open, and no one was in the elevator. I had not pushed a call button or anything. I would always say ‘thanks’ when I got on the empty elevator.”

Closed hotel sounds like it has visitors; security guard can’t find the source of the …
“I worked a security gig in an abandoned hotel, which sat directly on the river. When the rooms had balconies, they would hang out over the water. The hotel had closed down and had been stripped bare by the owners. I’m sitting in the office, and I hear a creak… creak… creak… from left to right on the floor above me. The hotel was wood-frame and creaked like a house when someone walked around. This sounded exactly like someone walking the hall on the floor directly above the office.I go up to the next level and into the hall. The hotel itself was only four floors high, but very long. The hall walls were bare, rooms had no doors, and only a single dim light bulb hanging from the ceiling in the middle of the hall gave any light. I have seen my share of horror movies, and know this can only be trouble, but I start walking down the hall anyway. After all, it’s my job to keep people out. I get about quarter way down the hall, and I hear rustling coming from a room. I draw my Mag-Lite (one of the three c-cell types) and get ready to use it. I slowly peek into the room and discover that it’s the wind blowing in from the river and moving a curtain. Now freaked, I start checking the other floors and find nothing, but I KNOW someone is in the building. I make my way back down to the ground floor, still finding nothing and go into the old ballroom. It’s a wide open space, and I start walking through it. Out of the corner of my eye, I see someone moving, so I turn and shine my light on them, ready to defend myself. That’s when I realize that it was my reflection in a broken mirror on the wall. After that, I got the hell out of there and spent the rest of the night in my car in the parking lot. About two weeks after that, the place burned down.

After all this time, I’m still convinced that someone was in the building, but I never found any evidence that there was.”