What inspired your latest novel?

Actually, I have two recently published novels, one of the novels, “Mrs. Murray’s Ghost”, is actually the first in a series.

“Queen Mary’s Daughter” was released in March 2018. This novel is an historical fiction/fantasy novel, inspired by a shared interest with my grandmother and spurred to fruition by the ongoing debate about Scottish independence. I like to ponder the many ‘what if’ scenarios in life and there are so many that could have changed the course of Scottish history. For example, what if King James VI of Scotland didn’t succeed in amalgamating Scotland with England? What if there had been another heir to the throne of Scotland? One who would secure its independence? Would Scotland have remained free and independent and a nation of its own well into the twenty-first century? And would Scotland, this independent version, make its own decision to join the European Union when its southern neighbor was choosing to pull away?

My grandmother was my muse in so many of my writing ideas. She and I had a special relationship. When I was old enough, we traveled together. One special trip took us to Scotland where we traced her childhood memories (she was born in Scotland) as well as followed the trail of Mary Queen of Scots. We had been enjoying a number of novels and biographies about the ill-fated queen and my grandmother ignited my interest by telling me about ancestors who helped in her escape from Loch Leven Castle. I always wanted to write about Queen Mary, but it wasn’t until the Brexit debacle and the ongoing desire of the Scottish people to separate from England, that I started looking more closely at the stories around Queen Mary. I knew she had given birth, prematurely, to twins while imprisoned at Loch Leven. History records that the babies died at birth and were buried on the island where the castle sat. An interesting footnote states that the location of the burial and the babies’ remains have never been found. So, I started thinking, ‘what if?’. What if there had been another heir to the Scottish throne and Scotland never did amalgamate with England and Ireland? And my story unfolded. There is a sequel to “Queen Mary’s Daughter”, written at the request of my growing fan club. “King Henry’s Choice” continues the story started in “Queen Mary’s Daughter”. Release date yet to be determined.

My pride and joy is the first book in the 4-part “Piccadilly Street Series”. So much of these stories evolved from my childhood experiences and what my grandmother always called my vivid imagination. “Mrs. Murray’s Ghost”, like “Queen Mary’s Daughter”, also explores the ‘what if’, the fantastical possibilities of my vivid imagination and a ghost that haunted my childhood home. And, yes, there is another Scottish connection in this story, as well as another connection with my grandmother. In fact, she plays a significant role in the story – the role of Granny. My memories played a significant role in inspiring me to write “The Piccadilly Street Series”, this being the first book. Fond memories of the haunted house where I grew up: the ghost, the bats, the uniqueness of the house itself. I have been writing family stories and memoirs for years and I wanted to try something a little different, something for younger readers. I have taught many young, aspiring writers, so I decided it was time I wrote a story they would enjoy reading. And they do. In fact, I gifted a copy of the book to the 10-year-old girl who lives in the same room in the same house that I called my own when I was 10, the same room and the same house as the main character, Mary, in “Mrs. Murray’s Ghost”.

How did you come up with the title?

I like to write about strong women (and girls), those who strive to be the best they can be, no matter what obstacles are placed in their path. Both novels have strong female characters, though Mary, the 10-year-old girl in “Mrs. Murray’s Ghost”, is still developing her strong female character. She grows (evolves) through the book, in fact, she becomes stronger with each book in the series. “Mrs. Murray’s Ghost” also deals with the issue of bullying. The bully who bothers Mary was modeled after the bully who bothered me throughout my early school days. I don’t think we’ll ever get rid of bullying, but it’s good that we’re starting to recognize and address the debilitating effects of bullying. Mary has her own means to stand up to her bully. 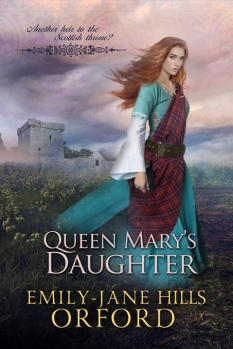 How much of the book is realistic?

“Mrs. Murray’s Ghost” is part memories of my childhood and part fantasies I conjured in my head using my ‘vivid imagination’. The first few chapters are almost exactly as it happened when we first moved into the haunted Victorian mansion.

Are your characters based on someone you know, or events in your own life?

The grandmother in both books are modeled after my grandmother. Gran (as we called her) always claimed we would soon forget her once she was dead and gone. She was too important to me to forget and I’ve proved her wrong in so much of my writing. Mary in “Mrs. Murray’s Ghost” is me as a 10-year-old.

Where can readers find you on social media and do you have a blog?

Do you have plans or ideas for your next book? Is it a sequel or a stand alone?

There is a sequel to “Queen Mary’s Daughter” – “King Henry’s Choice”.

“Mrs. Murray’s Ghost” is the first of 4 books in the “Piccadilly Street Series”.

Of the characters you have created or envisioned, which is your favorite & why?

The grandmother in both books. Why? Because Gran was so important in my life and I’ve made her character in my novels just as important in the lives of the main characters of each book.

Do you favor one type of genre or do you dabble in more than one?

Do you plan your stories, or are you a seat of the pants style writer?

A bit of both. I tend to be a planner at heart, but somehow the inspiration of the moment usually pushed me down an alternate tangent.

Don’t give up. Keep trying everything. I use Facebook a lot to frequently post a plug for my books. I actively seek book reviews and I encourage blog interviews (like this one) and blog tours to promote.

Do you find social media a great tool or a hindrance?

Both. It’s time-consuming to constantly post promos about one’s books. And, after awhile, people get tired of seeing yet another plug for my books and they stop paying attention to my posts. However, one must get the word out there somehow. And social media is the best way in this era of high tech everything.

The solitude and the thrill of letting my ‘vivid imagination’ take flight.

What age did you start writing stories/poems?

As soon as I could hold a pencil in my hand (probably about 5), I was writing stories. As the youngest in a family of storytellers, I couldn’t get a word in edgewise, so I wrote my stories.

What genre are you currently reading?

Do you read for pleasure or research or both?

Both. I also write a lot of book reviews, mostly for readersfavorite.com

Where is your favorite writing space?

I have an antique spinet desk that is positioned to look out onto my wooded front yard. I can write, like Jane Austen (only I write on a laptop), with the view of birds and wildlife as my inspiration.

Do you belong to a writing group? If so which one?

An avid gardener, artist, musician and writer, Emily-Jane Hills Orford has fond memories and lots of stories that evolved from a childhood growing up in a haunted Victorian mansion. Told she had a ‘vivid imagination’, the author used this talent to create stories in her head to pass tedious hours while sick, waiting in a doctor’s office, listening to a teacher drone on about something she already knew, or enduring the long, stuffy family car rides. The author lived her stories in her head, allowing her imagination to lead her into a different world, one of her own making. As the author grew up, these stories, imaginings and fantasies took to the written form and, over the years, she developed a reputation for telling a good story. Emily-Jane can now boast that she is an award-winning author of several books, including Mrs. Murray’s Ghost (Telltale Publishing 2018), Queen Mary’s Daughter (Clean Reads 2018), Gerlinda (CFA 2016) which received an Honorable Mention in the 2016 Readers’ Favorite Book Awards, To Be a Duke (CFA 2014) which was named Finalist and Silver Medalist in the 2015 Next Generation Indie Book Awards and received an Honorable Mention in the 2015 Readers’ Favorite Book Awards and several other books. A retired teacher of music and creative writing, she writes about the extra-ordinary in life and the fantasies of dreams combined with memories. For more information on the author, check out her website at: http://emilyjanebooks.ca