This coming weekend is not only a long weeked (whoop!) but also when I am spending four wonderful days fully immersed in my writing at Strawberry Creek Retreat. Anticipation is high for my fellow wordsmiths and I. My plan is to read through, revised and to some extent edit my current WIP – Willow Tree Tears. The novel is a cowgirl romance, with the heroine a champion barrel racer, enjoying rodeos and a ranch lifestyle. She finds herself having to choose between an old high school friend who lives a similar horse ranch life, or a suave, handsome wel- traveled Italian. There are numerous plot twists and several other characters and it does include adult content. Currently standing at 25 chapters (50,365 words) – I am aware it requires additional descriptions, dialogue etc. It was my 2013 NaNoWriMo novel so is rough to say the least! For an excerpt go to https://mandyevebarnett.com/current-project-2/

When we attend a writing retreat there are many personal aspirations and goals set – it is a time to have 100% focus on our work but we must decide on what our level of interaction will be within a group retreat. There are simple ‘rules’ that can be set out at the start of the retreat, such as a closed door means no interruptions, meals are taken together, prompts or short workshops will be available, exercise/walks can be taken in a group or solitary – no matter the format you should decide on what works for you.

Vital elements to the retreat are of course your means of writing! Bring your laptop, charger and memory sticks, notebooks, pens and pencils, research material, and any other related material that will assist you with the task in hand. Secondly, think about what you want to achieve within the time limits of the retreat. Make realistic goals so you enjoy the process but are not too exhausted to enjoy sometime away from the computer screen to refresh your mind, body and muse.

Have you been on a writing retreat?

What was your experience?

The title says it all – learn to take turns – this is a barrel racing saying. One of many I learnt while researching  my current WIP, Willow Tree Tears.  It was certainly a journey into a world I had no previous knowledge of. Isn’t that what makes writing fiction all the more exciting?

The barrel racing course itself is a series of sharp turns in a clover-leaf shape, as you can see from the diagram below. A figure-eight pattern was the initial barrel racing circuit but has been replaced by the favored clover-leaf course, which demands a higher skill level. When watching these events I marveled at the synchronicity of horse and rider at speeds that were astonishing.

Modern barrel-racing horses need to be fast, strong, agile and intelligent.  To maneuver the course in as little distance as possible requires physical strength and agility from the horse as well as the ability to follow commands from the rider. Horses that can “hug the barrels” and maneuver the course quickly  show up by their consistently low times. The favored breed for barrel racing is the American Quarter horse. The history of the breed began in the 17th century with British thoroughbreds paired with ‘native’ horses, (Chickasaw), which in turn were descended from horses brought over by the Conquistadors. Such as the Iberian, Arabian and Barb and wild horses.

The Girls Rodeo Association, (GRA)  was the first organization specifically developed for women, who wanted to compete in rodeos. It was formed in 1948 by a group of  Texan women consisting of only 74 members and  having a limited 60 approved tour events.  The group officially changed its name to the WPRA (Women’s Professional Rodeo Association) in 1981.

Subsequent to writing my narrative, I found out a new ‘reality’ TV program is on air – Rodeo Girls. However, the authenticity of its portrayal of women in rodeo is open to discussion.

Why does every show have to glamorize and falsify ‘real’ life?

I read many derogatory comments on a forum once the show was aired from barrel racers appalled at the depiction of their profession. I am happy to declare my narrative is true to the real barrel racers and their lifestyle.

Willow Tree Tears is a romance which follows my protagonist, Trinity, a champion barrel racing young woman. Trinity must decide between two men. A man she has known since high school and who lives the ranching and rodeo life and a suave globe trotting Italian. She is determined and focused in her sport and lives on a Quarter horse stud with her father. Can she resist the lure of the unfamiliar? Is marrying her ‘kind’ best for her and her father’s hopes for her future and the ranch?

The launch of Willow Tree Tears is still under negotiation but I will announce it as soon as a date is finalized.

What have you learnt about through novel researching?

Manacle – definition: a shackle for the hand; handcuff  – today’s post is number 410…Whew!

I will resist the lure of the obvious link here with a series of particular novels and go another route. Handcuffs have been used for decades and the original design has changed very little.

These were used in the trial for Abraham Lincoln’s assassination. 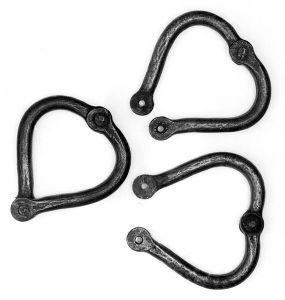 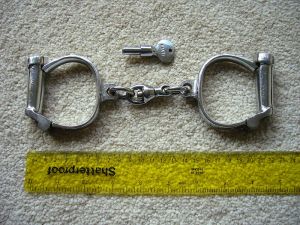 These types are more readily recognizable to the majority of us (form movies of course!)  2010

And for the ultra modern with different sizes for men and women and youth and also to denote various cell blocks.

As writers we are always researching for facts to ensure our characters and their setting are authentic. Among my list are healing herbs, the wound inflicted from a dagger, barrel racing, reincarnation and cabin building.

What is the most unusual fact you have researched?