If you are like me you have a movie running in your head when you read a book. You can ‘see’ the characters, their surroundings and what is happening. As a writer this is a wonderful tool for my stories. I see everything as I write, getting those images onto the paper is the trick.

So when we watch a movie, sometimes an adaptation of a book or a play we have read or watched, we compare what our vision is or was of the story. Sometimes the director and screen writer get it ‘right’, other times they do not. As you all know I am a Stephen King fan and have watched some of the movies made from his novels. The interpretations can be cringe worthy, such as Shelly Duvall in The Shining. I got angry at her scenes, she did not represent the character at all, she ruined that movie for me. Jack Nicholson, of course, was stupendous in his role, as only Jack can. One movie I watched, and re-watched was The Green Mile, it was expertly portrayed. This is most likely due to Mr. King being on set!

This brings me to several movies I re-watch due to their intriguing plot, my emotional response or the actors characterization. I have a basket of DVD’s that contain many movies, I enjoyed a lot. (This is not all of them though, it would be a very long post!)

The Lake House, which was adapted from Il Mare, a 2006 American fantasy romance drama film written by David Auburn. The movie has a time slip element with the two main characters living years apart but communicating through a mailbox.

Educating Rita, an adaptation of a screenplay by Willy Russell based on his 1980 stage play. I love the two opposing characters in this movie, chalk and cheese as they say. However, as their relationship grows there is a metamorphosis.

Shirley Valentine, this is another Willy Russell screenplay adaptations based on his 1986 one-character play. For many women this is the ultimate ‘escape’ movie. Who hasn’t dreamed of living on the ocean?

Ladies in Lavender, another screen play adaptation, this time based on a 1908 short story by William J. Locke. Superb acting by Dame’s Judi Dench and Maggie Smith bring this delightful story to life. There is heart ache, lost love, new passions and secrets. And, for me, the coastline is memories of home.

Julie & Julia, the film is the first major motion picture based on a blog. Giving yourself a deadline or a ‘monumental’ task can have its ups and downs as is plainly obvious in this movie.

Calendar Girls, based on a true story of eleven members of a women’s institute group raising money for a cancer charity with a nude calendar.

Which movies do you enjoy over and over? Are they adaptations?

You registered on WordPress.com 11 years ago.

Thanks for flying with us. Keep up the good blogging.

A huge thank you to all my followers for continuing to read, comment and participate in my blogging life.

Here’s to another 11 years!


As many of you know, I commit to a blog schedule at the end of each year for the up coming year. In 2021, my twice weekly posts will continue to be divided between writing topics and delving into my books and writing life for my readers.

I hope you will find the content interesting, enlightening and fun. I will post every Tuesday and Thursday each week as follows:

Stories behind my published books and also from works in progress.

Update on events I will be attending – if possible physically, if not virtually in 2021

Glimpses at my current writing project.

Sharing short stories or poem’s I have written from prompts or workshops.

Author Toolbox – once a month

Monthly Author Interviews (please sign up for one – first Thursday of every month.)

I will continue with my monthly newsletter, so please sign up when prompted. I hope we can develop a great relationship with this new venture – Sneek Peeks & Glimpses. Thank you in anticipation.

A huge thanks to Carrie Ann Golden for interviewing me regarding this year’s NaNoWriMo. Here’s the link.

Tell us why you participate in National Novel Writing Month

I find it a superb way to practice writing to a deadline, write without the worry of editing and letting my creativity flow with no constraints.

How/When did you first learn about NaNoWriMo?

My first NaNo was 2009 when I was persuaded by a new writing friend from my writing group to participate. At the time I’d only written very short stories (and I mean short). The idea of fifty thousand words made me refuse point blank but gradually she convinced me I could do it. That first NaNo’s project was edited and revised almost every year until I finally published it 2018.

How many years have you participated in NaNoWriMo?

This will be my tenth NaNo – I only missed 2017 when I was working on two manuscripts that were published that year.

What is your NaNoWriMo project for this year?

The idea came late in October (almost November) it just popped into my head to write a young romance set within a university campus. The two main protagonists have evolved into fully rounded characters now.

If you were to introduce yourself to a group of strangers, what would you say?

I indulge my creativity in writing whether writing fiction or aiding clients within my freelance business and am a writing community advocate.

Do dreams inspire your writing ideas?

I have used several dream sequences within my works of fiction, they are always vivid and I quickly write them down. I always have a notebook on the bedside table.

Who is your favorite author? Why?

Stephen King is my literary hero. He is the greatest story teller, creating characters with minimal description, grips your interest from the first page and never disappoints. My greatest possession is a personal letter I received from him. It is framed about my writing desk.

What is your preferred genre to write in?

I do not write to genre, I write the story an it chooses which genre it is as it unfolds.

I use my blog to interact with writers across the globe: http://www.mandyevebarnett.com

You can find me across social media –

On NaNoWriMo site I am MandyB 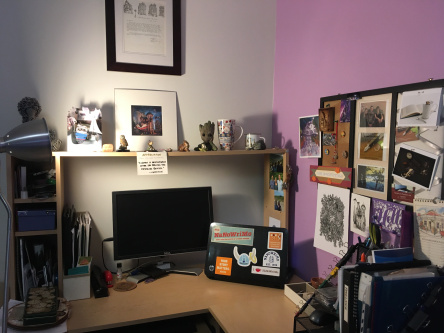 I am happy to be a guest on Stephanie’s blog today:

Happy Sunday, writers and readers! I am so pleased to introduce you to writer Mandy Eve-Barnett! We connected several years ago, as we both are writers and bloggers. Being in touch with and staying current with other writers is important as it helps push you and keeps you abreast of what others who share the […]