What inspired you to write your first book?
About ten years ago a lovely lady named Toni Sun did a reading for me. She told me I was going to write something special. I told her I was already a journalist for a small newspaper, but she said no. It would be a book; maybe two or three. I chuckled to myself as the thought had never crossed my mind. I asked her if she knew what the books would be about. She just said, “You’ll know.” But I didn’t. Then I began my quest to search for answers about the afterlife. As a medium, I had the opportunity to “speak” with spirits and hear their stories. Some of them had been waiting years for somebody to finally hear them. I promised I would share their stories so that others would remember them. And so, I began writing my book.

How did you come up with the title?
At first I could not decide on a title. Sure I had several tentative ideas, but not one that seemed quite fitting. I decided to start writing and figured the right one would find its way to me. Then one day my Great Grandmother Elizabeth “said” to me, “Let’s call our book “Whispers.” And so “Whispers Beyond the Grave” it was.

Is this your first book? How many books have you written (published or unpublished)?
This is my first book and I’m proud to say I have become an International Author already. Currently, I am working on two new books: “Fear the Darkness” and “When the Dead Come Alive.” I have also helped with the research on my friend Tom Conwell’s new book “They Are Here: Central US UFOs.” I verified the Native teachings for him. 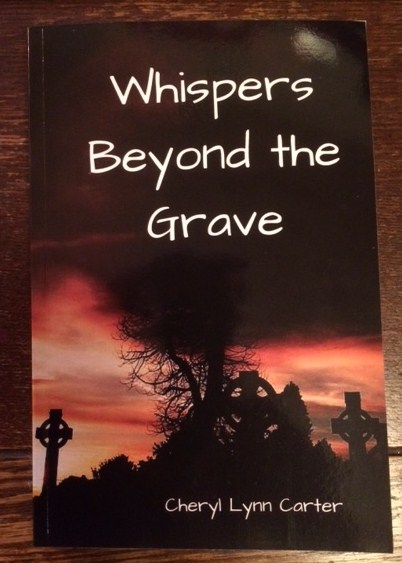 Can you tell us about your upcoming books?
“When the Dead Come Alive” is the next book about my adventures and encounters with those from the Other Side. I met a lot of spirits this past year that wanted their story to be told. I shall never forget my “new friends” from Waverly Hills, Ashmore Estates, Poasttown Elementary, Collingwood Arts Center, Willis House Inn, the USS Edson, USS Silversides, Detroit Fort Wayne and a special farm in Farwell, MI.

“Fear the Darkness” is a collection of dark and twisted short stories and poems. I’m not sure where these came from as they are a bit edgy for me; perhaps I was channeling Edgar Allen Poe!

Is there a message in your novel that you want readers to grasp?
The message that I want to convey is actually very simple. “Spirits were once people too!” Often times people forget this. They may have transcended into that mysterious dimension known as the afterlife leaving their physical body behind. However, they are still unique individuals like you and I with intelligence and feelings. They should always be treated with respect.

How much of the book is realistic?
My book is 100% true. I’m a Medium, Paranormal Researcher and EVP Specialist. This book is about my strange, scary, but mostly cool true encounters with the many spirits from the other side.

Do you have anything specific that you want to say to your readers?
You don’t have to be “gifted” to communicate with your loved ones that have passed on. Just talk to them. They can hear you. Perhaps they are already leaving you signs. Be more observant. Do you sometimes experience a whiff of perfume or pipe tobacco right under your nose? Does a certain song play when you are thinking about them? These are just some of the little ways they are letting you know that they are still around and thinking about you.

What do you enjoy most about writing?
I love sharing my experiences in such a way that the reader feels they are right there with me. It’s a real compliment when people say they enjoyed the trip.

What age did you start writing stories/poems?
I was inspired by my teacher Mrs. Foley when I was a freshman in high school. She made English class a true experience and I quickly grew to appreciate the written word. After that, the stories and poems flowed as my hand penned the cursive words over the paper.

What is your favorite part/chapter of your book/project?
Oh my, don’t make me choose. Each one of my paranormal encounters was special to me. But I suppose my favorite would be the chapter about Sarah. There was a local legend about a woman in white that would roam William Ganong Cemetery at night. The story was intriguing to me so I decided to visit one afternoon. I had been there only a short time when she appeared to me. She led me to her grave the old gravestone crumbling with age. As I brushed away the leaves, the words read, “Sarah Dickinson, wife of Mathew, died 1865 at age 20.” I heard her disembodied voice as she cried, “Help!” and also captured EVPs of the same. She told me she was waiting for her beloved Mathew to come back from the Civil War. He promised her he would return and she promised to wait. I quickly did the math and realized she had been waiting 148 years! I “saw” that she was sick perhaps with the deadly flu that claimed its victims in one day. She went to sleep and never awoke; she had no idea she was dead. After four visits to the cemetery, I finally sat down on the stone bench and had a serious talk with her. I told her the truth and that I knew where to find Mathew. As I encouraged her to walk over the beautiful bridge toward the light, she became hesitant. I asked Mathew to come to the bridge. There he was wearing his Union uniform and twenty years old again. He wanted to be just like she remembered. When Sarah saw him, she raced over the bridge and into his loving arms. In typical “Gone With the Wind” fashion, he picked her up and carried her away. It was a true love story.

What book are you reading now?
At the moment, I’m reading a great book by my good friend Jeff Mudgett called “Bloodstains.” After discovering diaries that belonged to his Great Great Grandfather Herman Webster Mudgett, he began searching to uncover the truth. The truth being he was really known as H.H. Holmes America’s most notorious serial killer during the Chicago World’s Fair of 1893.

Are there any new authors that have grasped your interest?
My friend Tom Conwell has written two very interesting books: “They Are Here: East Coast UFOs” and “They Are Here: Central US UFOs.” Both books contain amazing information convincing me that we are not alone in this universe.

Do you nibble as you write? If so what’s your favorite snack food?
I always enjoy a Coke and a Reese’s. They give me the energy I need to keep going.

Do you have any odd habits or childhood stories?
Besides the fact that I talk to dead people? Well, I do remember when I was four and Grandma would open the cedar chest. As she lifted the lid, the earthy scent would fill the room. She reached inside and pulled out some old books. Together we sat on the bed surrounded by generations of relatives living within the weathered pages. I watched as she carefully turned each page of black and white photographs fastened on with tiny black corners. Memories in bits and pieces spilled out before our eyes. Grandma said they were places she could return to again and again no matter how much times goes by. Although I did not know who these people were, it appeared they made Grandma smile. It was as though they were talking to her. But of course, I thought that was silly. Pictures didn’t talk. Then one day, she left me alone as she went into the kitchen. I picked up a photograph and held it in my hand. And indeed the photograph “spoke” to me. It felt as if my hand was a telephone allowing me to connect to some unknown place without ever dialing the number.

What genre is your next project? What is it about?
My next project is already underway. I’ve been asked to be part of a documentary called “The Mystery of Farwell Farm” about the mysterious happenings at my friend’s farm in Farwell, MI. We’ve been working on this for over a year and continue to discover new information.

How do we find your books, blog and bio?
My book is available on Amazon.com. You will find my Author page on Facebook by searching Cheryl.Lynn.Carter.author