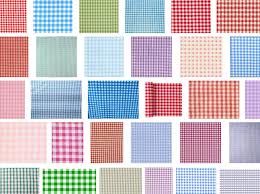 All I could see when I read this word was gathered gingham fabric across the kitchen sink window…isn’t that evidence of how strong images are? My next image was of my infant (elementary) school uniform, which was green and white gingham summer dresses or grey skirts and bottle green sweatshirt’s for winter.

So is gingham coming back into fashion now? I found a site, which has gentleman’s shirts in gingham – no more little girl’s with pigtails? I also found out that gingham is typically a colour and white not multi coloured like plaid. Once I starting delving into the history of gingham I found out it was first produced in 17th century England and the fabric shipped to the colonies. However, the original fabric was striped and only gradually became checkered. The most popular colour combination was blue and white. As for the actual name there are numerous possibilities to its origin. Ging-gang is Italian, genggang is Malaysian and Indonesia – take your pick. Whichever it is they all mean striped.

This fascinating post is worth reading – if you so wish. Lots of stuff I didn’t know about gingham. http://visforvintage.net/2012/09/11/gingham-fabric/

After reading all this it occurred to me that my image of gingham may not necessarily be true for everyone. I have it firmly set in the 1950’s but with the re-emergence of the fabric in later decades in other guises, it is quite possible that a younger reader would picture it entirely differently. So that makes for an interesting predicament, depending on the age of your readers and or the era you are portraying can significantly alter how the use of articles or items can influence your readers perception of where in time your characters are.

A point to consider and research when using iconic items, articles or music for that matter. All of them can evoke a different response in your reader. 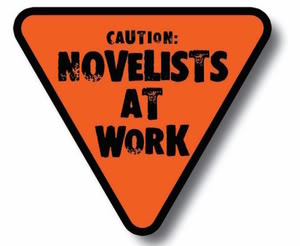