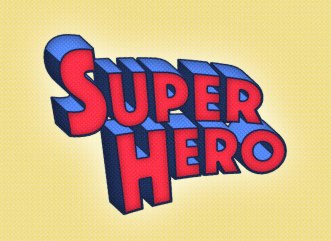 Superhero fiction originated in American comic books, although its popularity quickly expanded into other media through adaptations and original works.

It examines the adventures, personality and ethics of a costumed crime fighter, commonly known as a superhero, possessing superhuman powers, who has the desire or need to help the citizens of their chosen country or world by using their powers to defeat natural or super powered threats. They battle similarly powered criminals, referred to as super villains. The super heroes involve themselves (either intentionally or accidentally) with science fiction and fact, including advanced technologies, alien worlds, time travel, and inter-dimensional travel; but the standards of scientific plausibility are lower than with actual science fiction.

Superheroes sometimes combat other threats such as aliens, magical/fantasy entities, natural disasters, political ideologies such as Nazism or communism and godlike or demonic creatures. Super villains may not have actual physical, mystical, superhuman or super alien powers, but often possesses a genius intellect that allows them to draft complex schemes or create fantastic devices.

Both opposing characters have secret identities or alter egos, but for different reasons. The superhero hides their true identity from enemies and the public to protect those close to them from harm and to some extent problems that are not serious enough for them to become involved in. In contrast a super villain keeps their identity secret to conceal their crimes enabling them to act freely and illegally without risk of arrest.

Who is your favorite superhero?

Have you written a superhero story/novel? Care to share?

A good friend of mine wrote this superhero novel, which has a fantastic twist. https://www.amazon.co.uk/Powerless-J-McKnight/dp/1927510848