The origins of ‘Boxing Day’ are steeped in history and in my naivety, I assumed everyone had or knew of Boxing Day. Growing up in England my understanding was that it was an old tradition to open gifts the day after as Christmas Day was spent in church and then feasting.

The exact etymology of the term ‘boxing’ is unfortunately unclear and although there are several competing theories, none are definitive. Money and other gifts were traditionally given to the needy and to those in service positions, such as servants. The European tradition goes back to the Middle Ages but its exact origin is still unknown. There have also been claims that it dates back to the late Roman/early Christian era. It is known that metal boxes were placed outside churches to collect special offerings tied to the Feast of Saint Stephen. In England it was the custom in the nineteen-century for Victorian tradesmen to collect their ‘Christmas boxes’ or gifts on the day after Christmas in return for good and reliable service throughout the year.

The name could also derive from another old English tradition, where wealthy landowners would allow their servants to have the 26th off work to visit their families in return for a smoothly run Christmas Day feast. Each servant was given a box containing gifts and bonuses and sometimes leftover food! Also around the 1800’s churches would open their alms boxes and distribute the contents to the poor. These boxes were filled with monetary donations from the wealthier members of the congregation.

No matter which version you would like to believe, Boxing Day is still an enjoyable holiday and one spent with family and friends, enjoying the ‘left overs’ and new gifts.

What will you be doing this Boxing Day? 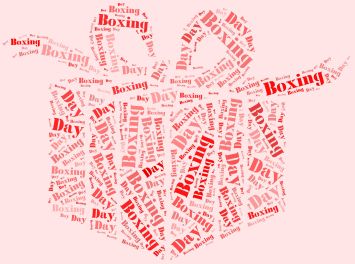