Again we have lost a wonderful author,Colleen McCullough. I was dismayed at the harsh comments concerning how she looked – what does it matter what the outside looks like? She was an accomplished author and a Neuroscientist. It was her imagination, her drive and her love of life – which is apparent by her gorgeous smile and twinkling eyes. We will value her work and obvious intelligence and her words in some 24 novels and shun the insincerity of ‘face value’, ‘puddle deep’ thinking.

Here is the announcement:

“It is with great sadness that Harper Collins Books Australia advise(s) that the iconic and much-loved author, Colleen McCullough, passed away on Thursday in hospital on Norfolk Island, aged 77,” the publisher posted on Facebook.

Her 1977 novel “The Thorn Birds,” which sold 30 million copies worldwide, was made in to a TV miniseries in 1983, starring Richard Chamberlain, Barbara Stanwyck, Jean Simmons and Christopher Plummer.

The generation spanning novel is set in the Australian outback. “A priest torn between his calling and the lure of a rancher’s daughter in this sumptuous epic…resulted in the second highest rated miniseries ever after Roots,”according to TV Guide.

At the time, the book’s paperback rights sold for a record setting price of $1.9 million.

McCullough was born in Australia, but lived and studied abroad for many years. She was a neurophysiologist and worked at hospitals in Australia and Britain, and for 10 years at Yale Medical School in New Haven, Connecticut.

Aside from “The Thorn Birds,” McCullough wrote more than ten other novels including the historical series “The Masters of Rome.” Her most recent novel, “Bittersweet,” was published in 2013.

She was also featured on an Australian Post postage stamp. “She was one of the first Australian writers to succeed on the world stage,” according to HarperCollins Books Australia.

“It is very sad to lose Colleen McCullough. Her contribution to storytelling is the stuff of legend, she will be greatly missed,” Random House Books Australia tweeted.

Did you read The Thorn Birds? Watch the TV series?

Which novel of Colleen’s did you enjoy the most? 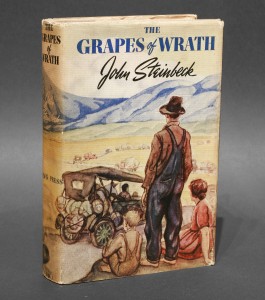 Yesterday Google celebrated John Steinbeck’s birthday with a doodle. You can view it through this link – http://newsfeed.time.com/2014/02/27/john-steinbeck-google-doodle/?iid=nf-article-mostpop1

Literary heroes are celebrated and rightly so, but shouldn’t they have as much postive fanfare when they are alive? When we list literary greats, many had conflict and dire circumstances in their lives. Would optimistic recognition have helped them or made their particular troubles worse? Some obviously did become the target of media frenzies in modern times but what of earlier authors? Just to take one female author – Charlotte Bronte. She had to write under a man’s name in order to be published and ‘recognized’. In this digital age recognition, whether good or bad is immediate but for these authors they never knew their fame. http://www.policymic.com/articles/62651/9-incredible-writers-who-only-became-famous-after-death

On the subject of fame I cannot omit this quote, which in itself is famous!

In the future, everyone will be famous for fifteen minutes. ANDY WARHOL

Fame or infamy, either one is preferable to being forgotten. CHRISTOPHER PAOLINI
And now for your fun prompt – You are a sudden sensation and the media are camped outside your home. How do you handle it?