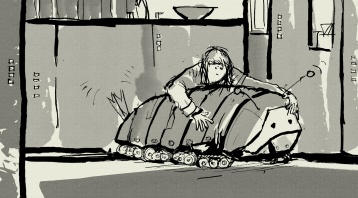 Today I am ‘interviewing’ one of the main character’s from Creature Hunt on Planet Toaria, a YA novella. Lenni is the main instigator in persuading her three friends to seek out the invading alien monster on their planet.

Can you tell us about why you live on another planet instead of Earth?

I can tell you what I know from history lessons. The human race suffered multiple pandemics over decades, which decimated the world population. In an effort to save the human species, one hundred generation ships were built and several space stations. These were built to offer a temporary home above the planet until the virus’ could be controlled or eliminated.

So how did you get here?

The expected term for being on the ships was extended over and over for years until each generation ship struggled to sustain its population. As the remaining human population on Earth died, a decision was made to head out in as many different directions as possible. The hope was that one or more of the generation ships would find a suitable planet to populate. After many years my ancestors ship found Toaria.

So then they landed and built all the domes?

It took another generation to build the domes and establish the growing pods. Several new technologies were created so that ‘soil’ was artificially grown from agar, molds and vermiculite and then seeds regenerated from capsules that had been frozen in transit.

Can you describe Planet Toaria?

It is mainly rock and dust but there are frackist trees and whickety vines. We have two moons and when they align, the sky becomes magenta then burgundy before total darkness. That’s our curfew time – we must be home by then. All the other plants are from germination of seeds brought here and cultivated in the home dome’s central gardens or in the growth pods. We have metal paths in-between the home domes and the community domes. Apart from the living areas, there is a complex of industry domes restricted to only workers and the military. Most of the planet is uninhabited still but as our population grows we expand with more sections.

Can you describe frackist trees and whickety vines, they sound fascinating?

The trees have thick trunks, which are topped with branches that look like an upside-down scalene triangle. They have sticky buds, which you mustn’t touch as the sap causes instant numbing to anything it touches. Climbing them is discouraged because of that. The vines have a natural luminescence in the leaves and they are planted along the main paths to grow along them and climb the metal columns.

I noticed that you do not have ‘normal’ pets, like dogs and cats. What do you have instead?

No, we do not have animals as such on Toaria, they were not allowed on the first ships from Earth. We have robotic ‘pets’ or bots as we call them. Each child is assigned a bot when they are born. It is a protector as well as a companion. They are made up of a series of metal intersecting plates, have compartments for supplies and technology and power up overnight as we sleep.

Can you tell us a little about the alien invader?

Initially, no one knew there was an invader but then my bot, Bubble chased off something and did not return for a long time. This is unheard of as they are to stay with their owner no matter what. When Bubble was found, his recording data did not identify what the thing was and that’s when I began to wonder.

Why did you decide to find the alien with your friends?

At first I thought it would be a fun thing to do with Troon, Braze and Nevis. You know to explore a little further than we are allowed. There are sections to the habitat only open to the military. I didn’t really think we would find it! As our search continued it got more serious and we all thought it would be an excellent way to be considered for a position within the security force.

Thank you for being with us today, Lenni and telling us about your life on Planet Toaria.

If you want to know more of the story the e-book is available here, on Smashwords, Kindle, Kobo and Barnes & Noble.