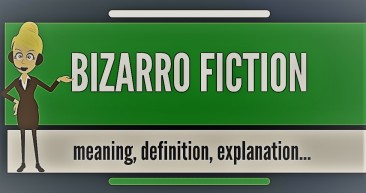 Bizarro fiction is a contemporary literary genre, which aims to be both strange and entertaining,  containing hefty doses of absurdism, satire, and the grotesque  along with pop-surrealism and genre-fiction staples, thus creating subversive, weird, and entertaining works. The term was adopted in 2005 by the independent publishing companies Eraserhead Press, Raw Dog Screaming Perss and Afterbirth Books.

The first Bizarro Starter Kit described Bizarro as “literature’s equivalent to the cult section at the video store” and a genre that “strives not only to be strange, but fascinating, thought-provoking, and, above all, fun to read.”

In general however, Bizarro has more in common with speculative fiction, such as science-fiction, horror and fantasy than with avant-garde movements (such as Dadaism and surrealism, which readers and critics often associate it with.

It seems to be a small niche genre and one that appeals to a select audience. However, I think it would be a fun exercise to write a story in this genre.

How about you? Have you written this genre? Or read any books in it?