Your prompt is to describe a ‘horror’…

This is my response. 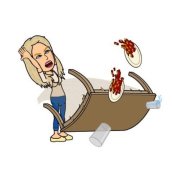 Aaron swung his legs onto the cold hardwood floor and cradled his head in his hands. Sleep had come; surprisingly; shortly before dawn – a short respite from his inner turmoil. The previous hours had seen him suffering intense horror and fright. What should he do now? Would anyone believe his story or even understand Shelley’s actions? Even Aaron was having difficulty comprehending why she would do such a thing.

With a deep breath Aaron slowly stood up and pulled on jeans and a T-shirt. He would have to face the carnage now, his first instinct, last night, had been to run but where could he have run to? No matter where he went they would hunt him down. He had huddled into the corner of the room shaking with fear and shock – his mind exploding with repeated images of their argument and Shelley’s vicious words cutting him as surely as any knife. Her unreasonable behavior had escalated the more he tried to pacify her and reassure her of his love. Her ear piercing screaming had been accompanied with any object within arm’s reach being thrown at him as Shelley emphasized her cruel words. Shards of glass and china showered down the walls and littered the floor – several had found their target and Aaron could now see cuts and bruises up the length of his arms. As he grabbed the bedroom door handle he struggled to keep his hand from shaking – afraid to face the scene of their fight.

You can’t stay in here for the rest of your life Aaron – get going. He walked through the doorway and down the hallway into the large living room. The absolute destruction of the room was similar to what a tornado could do. Picture frames, vases, lamps, chairs – all were broken or shattered and strewn like discarded toys. Aaron headed for the front door stepping carefully to avoid sharp shards of glass embedding into his bare feet. Once at the door he put on a pair of trainers and turned to face the devastation, but his body refused to continue turning toward the far corner. Images flashed across his vision of Shelley’s angry contorted face as spit flew out of her mouth along with her venomous words. Aaron stumbled as the flashback drained his head of blood. Don’t pass out in the midst of this mess, get control for God’s sake.

Aaron up-righted a chair and sat down taking deep breathes in an effort to keep calm. A ray of sunlight pierced through the drapes and threw glints of light around him, revealing the extent of the damage. It truly did look like a tornado had blown through, there didn’t seem to be anything left unscathed. Aaron’s ears buzzed with the absolute silence so startling after last night’s turmoil. You need to look now. He turned to face the far corner, all his muscles tensing in anticipation to see her body – the gun still in her hand.