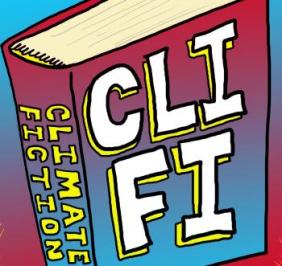 The literary genre climate fiction is commonly known as Cli-Fi. The narratives deal with climate-change and global warming, although not necessarily speculative in nature the narratives center on the world as we know it or in the near future. In essence it is an off-shoot of eco-fiction addressing the effects of climate change in short stories or novels.

Although the term “cli-fi” came into use in the late 2000s to describe novels dealing with man-made climate change, it is certainly not a ‘new’ literary topic as natural disasters have been themes to novels in the past. For example Jules Verne’s The Purchase of the North Pole in 1889 relates to a change due to the Earth’s axis tilting. His Paris in the Twentieth Century, written in 1883, relays a sudden drop in temperature lasting three years in a titular city. J.G. Ballard used persistent hurricane-force winds in The Wind from Nowhere in 1961 and melted ice-caps and rising sea-levels caused by solar radiation in The Drowned World in 1962 (somewhat of a prophecy!)

This genre has grown as scientific knowledge of the effects of fossil fuel consumption and resulting increase in atmospheric CO2 concentrations has become the global warming phenomenon.

Have you written Cli-fi?

Did you know of this genre before today?